This post may include affiliate links. Read the Disclosure for more information.

Thanksgiving is so soon and I CANNOT WAIT TO STUFF MY FACE WITH PIE. We are definitely adding these Pumpkin Pie Samosas to our dessert line up in the Garg household! With delicious, crispy fried crust and an easy pumpkin pie filling… I mean, how can you not impress??

Hear me out! Our Thanksgiving dinner tables are going to look a little different this year. So, I’m saying let’s try something new? Skip the pain of making a perfectly flaky crust with gorgeous crimped edges… We’re talking DEEP FRIED pumpkin pie. Covered in cinnamon sugar. Dipped in caramel and topped with whipped cream. Wowowowow!

And just a disclaimer… these are NOT anything like Trader Joe’s Mini Spicy Pumpkin Samosas. While their samosas do have pumpkin, the Trader Joe’s samosas are savory with paneer and warm spices. These are the exact opposite!

Every non-desi that has tried Indian food has undoubtedly had samosas. Whether you’re the samosa crust or the potato filling person (I’m a crust gal!), you’re going to want the whole thing to yourself.

Samosas are served as an appetizer or snack. It’s fried or baked pastry with a savory filling made up of spicy potatoes, peas, and onions as the base. There’s also a lot of variations on fillings, such as with pumpkin, chicken/beef/paneer keema, etc. It’s folded into a cone or triangular shape. It’s typically served with imli chutney and cilantro chutney.

CAN SAMOSA DOUGH BE MADE IN ADVANCE?

Yes! And it does need some time to rest, as most dough does to form the gluten. This helps when rolling out the dough to make the circles so plan ahead. The dough should rest covered and for a minimum of 20 minutes.

CAN THESE BE MADE VEGAN OR VEGETARIAN?

Well the good news is that most samosas are vegetarian and this one is too!! To make this recipe vegan, substitute the milk powder with a dairy-free milk powder substitute (potato, coconut, rice, etc). This can potentially change the flavor, but not by too much. Instead of using ghee for the dough, you can use vegetable oil in the same amount. You can also omit the whipped cream or replace it with coconut whipped cream.

CAN I PRE-MAKE PUMPKIN PIE SAMOSAS?

Yes!! In addition to being able to make the dough a few hours beforehand, you can also assemble the samosas and refrigerate them for 6-8 hours before frying. You can also freeze the pre-assembled or fried samosas for up to 6 months. Pop them in the oven and bake for 20 minutes when ready to eat.

DO I NEED TO DEEP FRY SAMOSAS?

Although I fully believe deep frying creates the absolute best samosas, especially when indulging for Thanksgiving, you can also bake or air fry them.

To bake the samosas, preheat the oven to 400°F and line a baking sheet with parchment paper. After assembling the samosas, brush them lightly with oil and bake for 25 minutes, or until golden brown.

In my opinion, air frying works but doesn’t give the best results unless you’re reheating the samosas. To air fry samosas, lightly brush the samosas with oil and air fry for up to 15 minutes. Be sure to keep your eye on them.

HOW TO MAKE PUMPKIN PIE SAMOSAS

There are 6 main steps to making samosas:

LOOKING FOR MORE FALL DESSERT RECIPES? CHECK THESE OUT:

I’d love to know what you thought of this recipe! Leave a comment and rating below! You can also find me on Pinterest and Facebook, or stay in touch with me via my Newsletter! 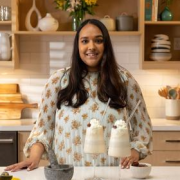 Three words for you. TREAT. YO. SELF. I’m Shweta, a self taught recipe developer and photographer living in New York City. I’m a full time cloud consultant who enjoys eating out at restaurants and spending my weekends trying out new recipes, all while indulging a little in the finer things in life. Good food? #TREATYOSELF. Glowing skin? #TREATYOSELF. Beach vacation? #TREATYOSELF.